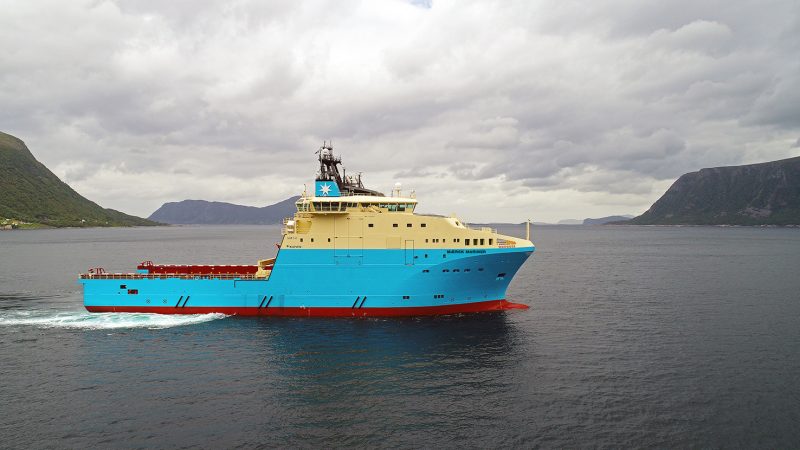 Maersk Supply Service has successfully completed the tow of a semi-submersible from Las Palmas to North-Western Australia.

The tow was carried out by a newly-built Anchor Handling Tug Supply vessel, the Maersk Master of the Starfish series. The vessel was designed to be energy efficient and minimise fuel costs during transit.

The first leg of the tow of the semi-submersible MODU rig was direct from Las Palmas to Cape Town. Maersk Master and the rig then rounded the Cape of Good Hope for a final port call in Port Louis, Mauritius before crossing the Indian Ocean to join Quadrant Energy’s Phoenix South and Van Gogh drilling campaign off the north-west coast of Western Australia. The total journey was 10,230 NM for a total of 87 towing days.

Design features of the Maersk Master and her sister vessels of the Starfish series include a fuel efficient and flexible hybrid propulsion system, enabled fuel consumption and associated costs to be minimised throughout the tow. The high capacity vessel was able to accommodate the complete rig mooring system onboard, allowing for a minimised rig draft, in addition to optimised bunker costs along the journey (retaining a maximum bunker of 2300t).

“Our new-build vessels are designed to maximise fuel economy and be flexible in the way they use power. However, there is always more that can be done during an operation to ensure fuel consumption is kept to a minimum. That is why we scrutinise all operational plans to make sure we optimise work scopes with our customers and ensure lower speed is used when timelines allow,” explained David Kearney, Maersk Supply Service’s Managing Director and Operations Manager (Asia-Pacific).

Maersk Master has continued to support the semi-submersible with supply and anchor handling duties, alongside sister vessel Maersk Mariner. Both vessels are supporting the campaign, which initially covers three wells. More information on Maersk Master can be found here