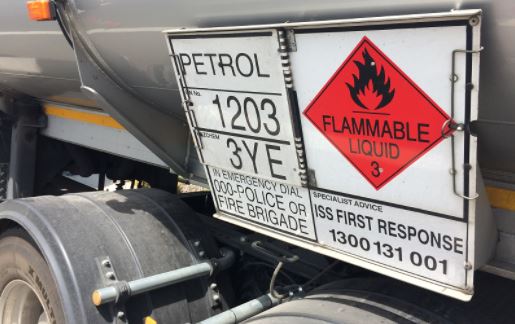 
The NSW Environment Protection Authority (EPA) has fined a Dangerous Goods transport company $4,000 for not appropriately supervising one of its drivers to ensure safe and lawful transportation of dangerous goods.

In December 2020, a member of the public observed a petrol tanker, operated by Days Logistics, on the Bradfield Highway without carrying the proper warnings in the afternoon peak and notified the EPA.

An EPA investigation found the tanker was carrying petrol at the time however, the driver had not used the correct warning signs. The tanker was instead displaying the words ‘combustible liquid’, indicating it was not carrying dangerous goods.

NSW EPA Executive Director Regulatory Operations, Steve Beaman, said the company had not given their driver sufficient training or supervision.

“Companies transporting bulk dangerous goods need to do everything they can to prevent high-risk behaviour from drivers. It is not enough to hand a driver a manual and a delivery address and let them loose with a petrol tanker,” Mr Beaman said.

“With incorrect signage on the vehicle, emergency services and the public have no idea of the danger of fire or explosion from the flammable liquid in the event of an incident.”

“Transport companies need to ensure dangerous goods are transported safely and lawfully. Their drivers should also be trained to use the correct routes for the goods they are carrying.”

Dangerous Goods transport companies can prevent their drivers from using prohibited routes by:

In addition to the $4,000 fine issued handed to Days Logistics, the driver was fined $400 for displaying false and misleading signage.

Members of the public are encouraged to report potential dangerous goods transport breaches to the EPA’s 24/7 Environment Line on 131 555.