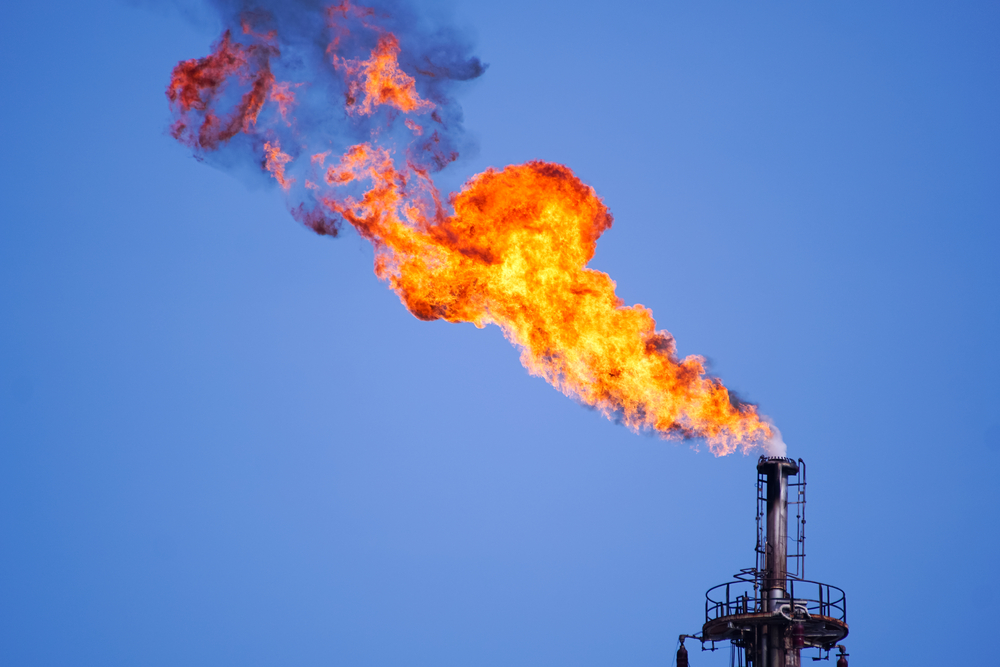 Image: Flaring of gas at an oil refinery.

The increase was a result of intense weather conditions in Texas which forced oil refineries, gas plants and even LNG terminals to initiate the emergency release of gas.

Flaring at oil refineries, in particular, rose to 64 MMcfd, the highest in Rystad Energy’s database, which dates back to January 2018.

Breaking down the amount of gas flared at non-upstream oil and gas facilities last month, the largest month to month rise in percentage terms was at LNG terminals.

The amount of gas flared more than doubled, climbing to 29.7 MMcfd from 11.9 MMcfd in January. In 2020, gas flaring at LNG terminals has only been higher in October, when it reached 30.9 MMcfd.

Flaring at gas processing plants also rose to a six-month high, reaching 87.1 MMcfd, up from January’s 58.9 MMcfd. Despite the increase last month, Rystad Energy noted that flaring at these plants was still far lower than most monthly averages of 2019, when the amount sometimes exceeded 150 MMcfd. The 64 MMcfd of gas flared at oil refineries in February, compares to January’s 39.7 MMcfd.

Head of shale research at Rystad Energy, Artem Abramov, said the extreme weather conditions that Texas experienced in February forced many facilities to flare gas, as there was no other exit to feed it into and just immediately closing the gas tap is not possible.

“However, our latest daily data suggests that non-upstream flaring has declined again, back to the moderate levels observed in January 2021,” he said.

Separately, Rystad Energy’s wellhead flaring estimates, that are using state reporting and that naturally come with a significant lag against real-time satellite data, show that in the major U.S. liquids basins of the Permian, Bakken, Eagle Ford, the DJ and Powder River combined, wellhead gas flaring declined further, to slightly over 450 MMcfd in December.

That implies a near 70 per cent reduction in associated gas flaring for the U.S. onshore industry from the peak of about 1.47 billion cubic feet per day (Bcfd) touched in June 2019 and a further 10 per cent decline from the low of 480 MMcfd reached in May 2020 during the peak period of production curtailment that was triggered following the rapid spread of COVID-19.

The two biggest contributors to flaring – the Permian and Bakken – each saw sequential declines through the fourth quarter of last year. Wellhead flaring fell to around 200 MMcfd in the Permian, and to 180 MMcfd in the Bakken shale in the last month of 2020.

As gross gas output in each region remained relatively flat through the fourth quarter, the decline in flaring meant that flaring intensity touched new multi-year lows.

With nearly complete gas production and disposition reporting for December, the latest data indicates that only 1.2 per cent of produced gas was flared in the Permian, and 5.8 per cent in the Bakken.

While the Bakken region still lags other major oil basins in terms of its flaring intensity, the relative improvement from around 20 per cent recorded in the first half of 2019 should be viewed as a structural shift toward more sustainable oil development practices in the play, with the general market downturn of last year accelerating this transition.

Rystad Energy’s satellite-based analysis of the daily gas combustion data confirms a gradual slowdown in total flaring through 2020’s fourth quarter in the Permian and Bakken regions, for both upstream and midstream.

The data suggests that it is likely that another month of sequential declines in the reported flared gas volumes will occur when Rystad Energy publishes the January 2021 numbers.

The company notes that the picture might, however, look different for February, and potentially for March as well. A material uptick in natural gas combustion is evident in the Permian in the second half of February, shortly after the peak of the winter freeze in Texas.

Rystad Energy has previously addressed some of the environmental challenges resulting from the collapse of the state’s energy infrastructure in mid-February, when the industry was forced to flare some of the gas when it was needed the most to run power plants and heat homes. They have also seen a large backlog of fracked wells awaiting flowback services in the Permian, with most jobs delayed during the week of 17 February.

These wells subsequently started coming online in the last week of February, contributing more to the region’s total flaring. Essentially, gas flaring was artificially low in the Permian in the first half of last month and more volumes were flared toward the end of the month – possibly sending the average rate of flaring in the basin temporarily to levels not seen since July 2020.

The flaring figures are calculated by a detailed thermal analysis of the company’s near-real-time satellite data, using a methodology developed by Rystad’s Shale team. Rystad will be polishing the methodology further to improve its granularity and accuracy going forward.