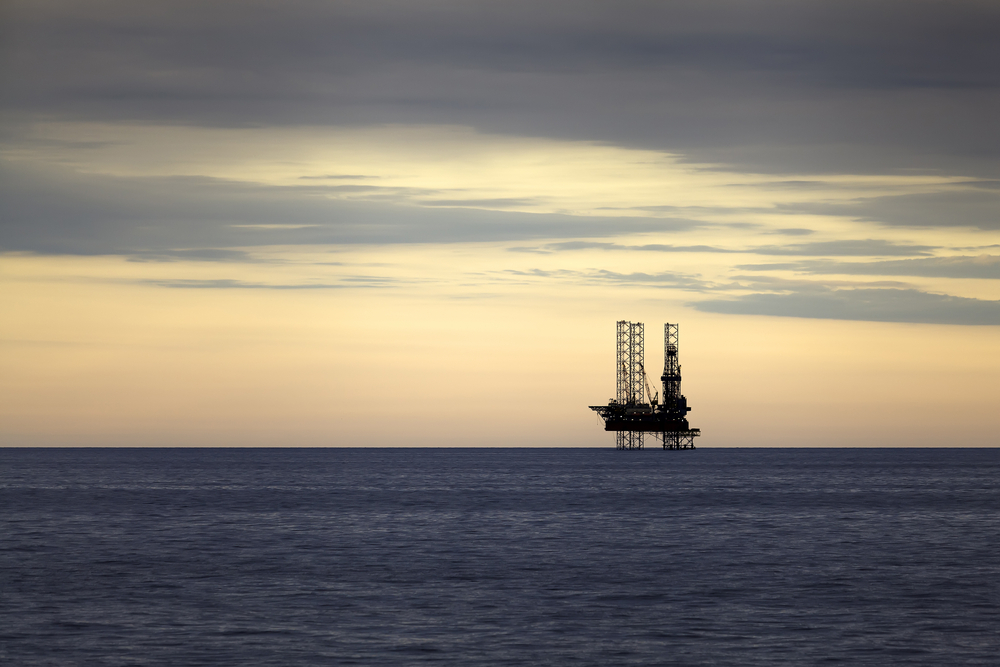 Despite concerns that COVID-19 could drive down discovered volumes to their lowest levels in decades, exploration activity has been resilient this year. Found resources already surpass 8 billion barrels of oil equivalent (boe) and are forecast to settle at around 10 billion boe by year-end, according to new analysis from Rystad Energy.

Approximately 3.75 billion boe, or 46 per cent of total discovered volumes, are gas while liquid volumes are estimated at 4.31 billion boe.

Yet, uncounted resources in finds like Sakarya in Turkey point to additional upside, meaning that 2020 will avoid returning to the multi-decade low seen in 2016 at just 7.7 billion boe.

The 73 new discoveries announced this year (through October) are evenly split between land and sea with 36 onshore and 37 offshore.

Russia leads in terms of discovery volume, with 1.51 billion boe, while Suriname comes second with 1.39 billion boe and the UAE follows third with 1.1 billion boe.

Of the offshore volumes, which account for slightly over three-quarters of discovered resources, 33 per cent was found in ultra-deep waters, 38 per cent in deep-water areas and 29 per cent in shallow waters.

Looking at the timing of the discoveries, the third quarter was the weakest with roughly 2 billion boe of new finds, compared to about 2.7 billion boe during each of the first two quarters.

Senior Upstream Analyst at Rystad Energy, Palzor Shenga, said global oil and gas operators will chase plenty of additional volumes in wildcats planned for the final two months of 2020, although some may not be completed until early 2021 and will therefore add to next year’s tally.

“We believe discovered volumes are likely to settle at around 10 billion boe,” detailed Shenga. 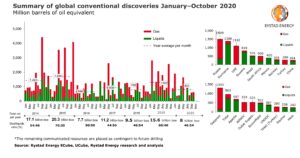 Oil and gas companies’ exploration plans have included prospects with higher chances of success in mature areas, as well as high-risk, high-reward wildcats in frontier regions, resulting in some game-changing offshore discoveries.

The willingness to invest in high-risk probes proves that exploration and production companies are not shying away from frontier basins – if prospects are promising enough.

Companies have experienced exploratory success in emerging plays in countries including Suriname, Guyana, South Africa and Turkey, as well as in proven mature regions such as Brazil and Norway.

When ranking companies by discovered volumes, Rystad highlights that Russia’s Gazprom is in the lead, ahead of Total and Apache.

The latter two have found around 960 million boe and 700 million boe respectively of net recoverable resources this year, mainly thanks to three major discoveries in Block 58 off the coast of Suriname.

Rystad expects that only about 4.5 billion boe of the 8 billion boe discovered so far this year will be produced by 2040, and in coming years annual discovered volumes are likely to settle at a new normal of around 10 billion boe per year.

First, oil and gas players are streamlining portfolios and exploration strategies and will scrutinise prospects more closely than before, thereby reducing the number of wells that will be drilled. Rystad notes that a more stringent selection procedure for drill-ready prospects means that only the ones with the highest chance of success will see a spinning drillbit.

Second, companies will be less willing to drill high-risk wells in environmentally sensitive frontier areas, both for financial and environmental reasons.

As a result, the full petroleum potential of areas like the Alaskan Arctic, Foz do Amazonas in Brazil and the Barents Sea may never be unlocked.

While fewer wells will be drilled, Rystad anticipates that improved data access and digitisation will help operators pinpoint successful prospects with more accuracy.

Today a large portion of exploration data is restricted. However, increasing access to data and the growth digital platforms will enable exploration teams to rapidly discover and access basin-scale data, and manage exploration opportunities using data sharing across multi-disciplinary teams.

Increasing use of digitisation will reduce costs and make exploration procedures more standardised, and data sharing and collaboration means each operator will need to drill fewer wells to understand the subsurface. This will lead to higher productivity per well drilled.