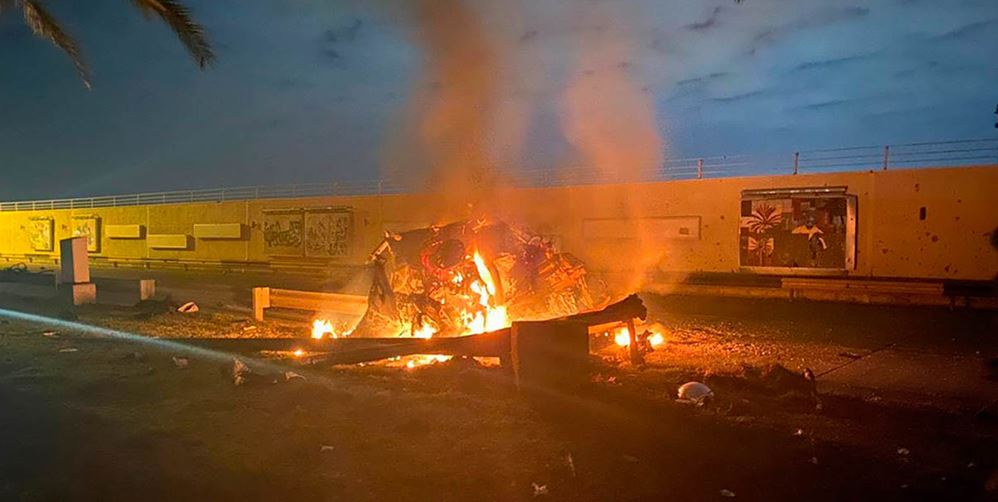 Image showing a burning car after a rocket attack on the Baghdad International Airport on January 3, 2020. Image credit: Iraq Ministry of Defence/Facebook.


On 3 January 2020, the U.S. carried out a strike on a convoy travelling near Baghdad International Airport, killing Iranian Major General Qasem Soleimani of the Islamic Revolutionary Guard Corps, commander of the Quds Force.

The United States asserted that the strike was approved by President Trump to disrupt an “imminent attack” and the United States Department of Defense issued a statement that General Soleimani was “actively developing plans to attack American diplomats and service members in Iraq and throughout the region”.

Iraq has considered the attack as undermining its national sovereignty, breach of its agreement with the U.S. and an aggression against its officials.

The event has significantly increased tensions between the U.S. and Iran and has sparked concerns from people around the world.

Managing Oil and Gas analyst at GlobalData, Will Scargill, has offered his view on how he believes the event could impact the global market.

Mr Scargill states that increased tensions between the U.S. and Iran following the killing of Qasem Soleimani ‘certainly add risk to the global oil market’.

“The potential for disruption to major supply centres was brought into sharp relief by the attacks on Saudi Aramco’s Abqaiq and Khurais facilities in September 2019,” he said.

“However, it should be remembered that the wider market context is one of global oversupply, with the OPEC+ group having agreed additional production cuts last month.”

“Oil prices soon returned to previous levels after the September attacks despite these having temporarily taken out around 5 per cent of global supply. Therefore, the effect on the oil market of these heightened tensions is likely to be time and value-limited,” Mr Scargill said.

“More significant market effects would likely only come from a major escalation in Iran’s response, such as major disruption to oil transit through the Strait of Hormuz.”