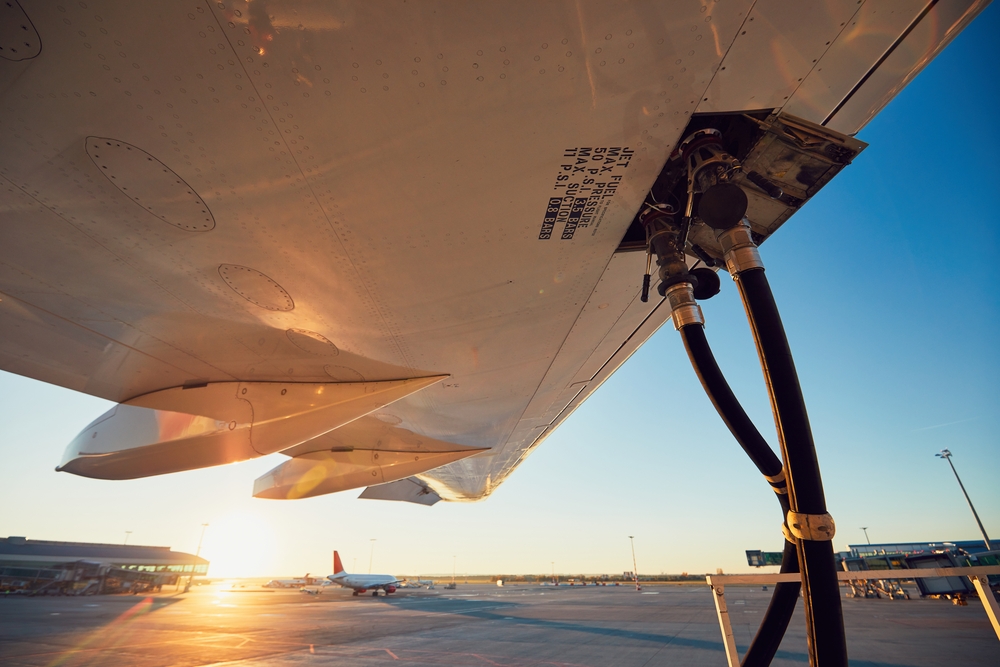 Image: An aeroplane being refuelled before a flight.


International aviation restrictions are still preventing jet fuel from recovering as fast as other fuel products, Rystad Energy analysis has revealed. The company says that most of the demand reduction seen in road fuels since the outbreak of the pandemic has now been reversed, and jet fuel has thus become by far the top laggard that is keeping total oil demand from recovering to pre-COVID-19 levels.

Looking at the total demand for oil products, much of the COVID-19 effect of 21 million barrels per day (bpd) reduction in April 2020 has been reversed, with July’s demand landing about 4.5 million bpd lower than its pre-pandemic level.

Rystad Energy’s August estimate stands at 4.4 million bpd but based on month-to-date mobility restrictions in China and elsewhere, the company finds that the demand could increase beyond that, before it likely starts to shrink.

Demand reduction is expected to dissipate towards the end of the year, with December demand for oil products slightly above its 2019 equivalent.

Rystad Energy estimates that jet fuel demand in 2021 will end up being about 2.7 million bpd below 2019 levels, while diesel and gasoline (primarily used as road fuels) will only lag by 1.2 million bpd against the same period.

For gasoline and diesel, July 2021 demand was 1.6 million bpd lower than before the pandemic and the August effect is calculated at 1.5 million bpd, carrying the same risk as described above.

Rystad Energy sees the negative COVID-19 impact on road transport completely dissipating by the end of 2021 if not held back by slow vaccine programs or worsened Delta outbreaks.

Contrary to road fuels, jet fuel has struggled recently. July 2021 demand was 3 million bpd lower than what it was in July 2019, before the pandemic.

The company notes that August’s demand gap is for now calculated at 2.8 million bpd but could rise to 3 million bpd if the recent lag in aviation activity persists.

Even though the effect is expected to thin down gradually, December 2021 will still see a demand shortfall of about 2 million bpd for jet fuel. 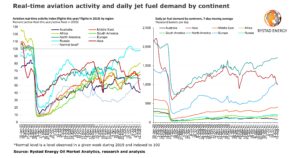 The aviation industry’s activity levels vary considerably across different regions. By mid-August, Rystad Energy’s real-time monitor shows that Russia is the only region where flight activity has completely recovered against the same period in 2019.

North American flight activity – having climbed in the first quarter of 2021 to above 70 per cent against pre-COVID-19 levels – has since regressed to just below 60 per cent.

Europe, the only continent where aviation activity failed to exceed 50 per cent of its pre-COVID level until the beginning of this summer season, is on a positive trend as the number of flights in mid-August rose to 57 per cent of pre-pandemic levels.

Asia, meanwhile, is suffering the largest activity shock; even though the number of flights had risen to above 80 per cent by April 2021, it now dropped to just 45 per cent of its pre-pandemic level.

This imbalance in aviation activity between the various regions has caused a demand milestone not reached in more than a decade.

While European jet fuel demand had hovered around 1.4 million bpd in the beginning of 2020 – far below Asia’s 2.2 million bpd – the roles have now changed.

European jet fuel demand surpassed that seen in Asia in mid-August this year, a remarkable feat considering the comparative size of the two continents’ populations and airliner fleets.

According to Rystad Energy, European jet fuel demand reached approximately 1.04 million bpd in mid-August, thus surpassing Asian demand that dipped to an even 1 million bpd as a result of China’s new restrictions to fight the Delta variant.

Simen Eliassen, oil market analyst at Rystad Energy, commented: “The swift restrictions in China are causing a complete collapse in domestic aviation, which has lost the momentum of its recovery and is now almost back to the lows of the pandemic’s first wave. When Chinese flight activity eventually rebounds, Asian demand is expected to outpace Europe again.”

The negative impact on domestic flights in China commenced in May with the arrival of the Delta variant, but a further slump is now detectable as authorities locked down some regions after a flight from Moscow to Nanjing in mid-July sparked another COVID-19 outbreak.

Cases and hospitalisations are generally low, but the Chinese government is taking a very cautious approach as the virus is present across many different provinces.

The government introduced strict stay-at-home policies in outbreak zones and advised against travel between most provinces, suspending domestic flights in some regions.