Offshore helicopter traffic declined in 2020 due to COVID-19 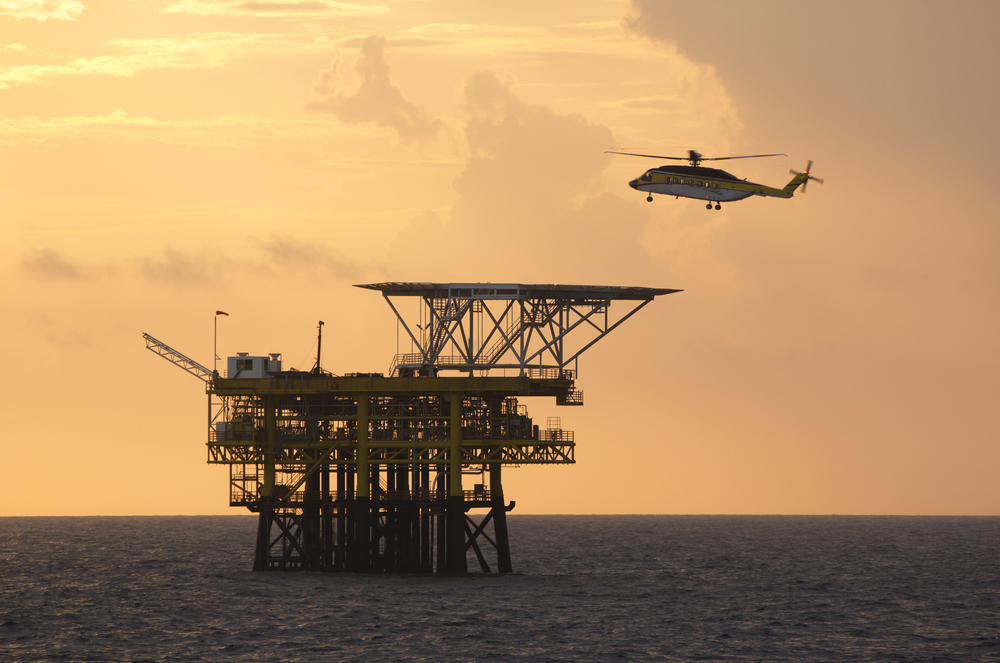 
Global demand for helicopter transport to offshore facilities plunged in 2020 as a result of the COVID-19 pandemic, a Rystad Energy report has highlighted. Helicopter traffic was affected as non-critical maintenance crews were moved to shore and other non-essential operations at offshore facilities were preventatively deferred to reduce the risk of contamination and conserve cash.

The North Sea is the world’s busiest region for offshore-bound helicopters, representing 22 per cent of global traffic. It is followed by Brazil with 11 per cent, West Africa and the US Gulf of Mexico with 8 per cent each and Australia with 3 per cent. The remaining 48 per cent is shared amongst all the other remaining regions.

Helicopter passenger demand is driven by a variety of factors; distance from the offshore facility to the onshore heliport, offshore workers’ rotation schedules, bed utilisation, and the share of flexible/project beds across different facilities.

However, positive flight traffic reports indicate that activity could bounce back by the end of 2020. In Norway, for example,  while reported offshore passenger traffic shows a 14 per cent decline in the first 10 months of 2020 compared to the same period last year, the October reported passenger traffic shows an increase of around 10,500 (to 45,500) from traffic lows in April.

In 2021, Rystad Energy expects offshore helicopter traffic to rise to 460 million passenger miles. Going forward into 2022, the company expects a small increase in the average distance from facility to heliport, driven by an increase in the number of deep-water operations, which will help traffic to exceed even 2019 levels and reach an estimated 487 million passenger miles. 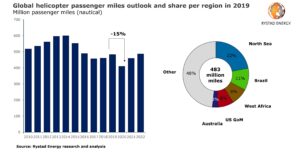 Of the two main drivers for offshore helicopter demand, production facilities are comprised of steel platforms and FPSOs, while MODUs include semisubmersibles, drillships and jackups.

For the purpose of its analysis, Rystad Energy defines the production facilities market as all offshore production facilities with helidecks. Platforms make up a stable underlying driver for helicopter flights, but in terms of units, this market has been on a constant decline since its peak in 2013 up to 2019.

This year, COVID-19 has had a limited impact on existing production infrastructure as active production facilities are not typically affected by variations in oil price, and most activity (both shut-downs and new developments) requires long-term planning.

Looking towards 2022, the company expects this trend will continue as old fields are shut down due to depleted resources, and the dearth of new field developments is unable to offset the decline.

The lower chart in figure 1 shows the historical and forecasted development of the MODU market. Unlike production facilities, MODU demand is highly exposed to oil price movements as it depends on oil companies’ cash availability, which can be cut to increase short term cash flow.

A modest recovery in 2018-2019 was halted by the pandemic this year, as exploration drilling (both wildcat wells and appraisal wells) took a major hit, down by 48 rig years or a 40 per cent cut to activity year-on-year. However, demand could start to increase from next year with the expectation of improving oil prices and reduced uncertainty.

Development drilling, which relates closely to new facility sanctioning and infill drilling at producing fields, is less prone to the contract cancellations seen this year. Most sanctioning for next year has already been contracted, providing good visibility into next year, and Rystad Energy estimates rig demand will fall by 6 per cent in 2021 before beginning to recover in 2022.

When it comes to industry suppliers, the three leading oil and gas air carriers are the Bristow Group, CHC Helicopters, and PHI, all of whom have come out of chapter 11 bankruptcy protection in recent years. This has led these companies to reduce their debt obligations and write down assets.

After emerging from debt restructuring, Bristow Group joined hands with its competitor Era Group in an all-equity merger that was completed at the end of the second quarter of 2020. The merger created a larger, more diverse player with a combined fleet of more than 300 modern aircrafts.

This created pressure on smaller players in a deteriorating market, with the largest three players flaunting more robust balance sheets and controlling more than 50 per cent of the market

“Companies had to ration fleets and were forced to accept contracts with lower margins, which drove some out of the market,” Hansen said.

The recent uptick in the market can be considered a blessing, but Rystad Energy states that suppliers should continue to be wary of the low activity and limited new contract awards.

Overcapacity and price pressure could remain major challenges, leading to a further decrease in the number of suppliers due to companies exiting the market, or by way of market consolidation amongst smaller suppliers.

Rystad believes that market consolidation would result in the sharing of high fixed costs, which are required to run an air carrier. Ultimately, this could create a more sustainable industry structure.