Next phase of giant field development in Brazil launches 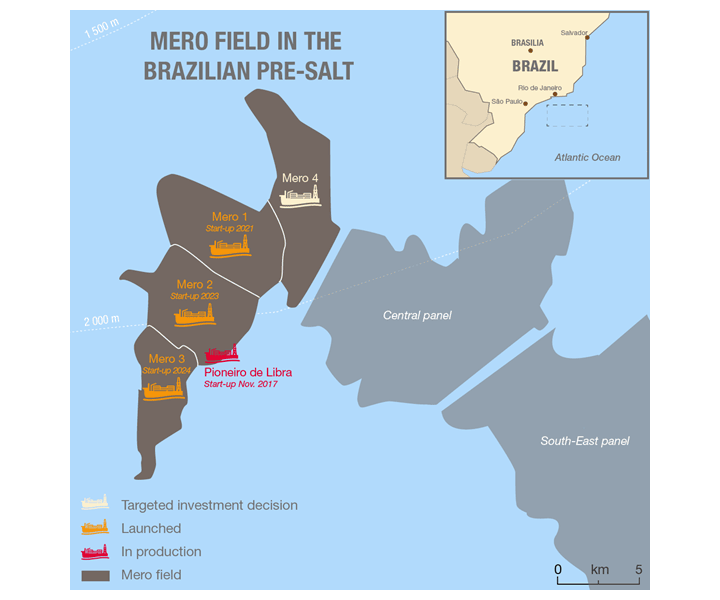 Total and its partners have made the investment decision for the third phase of the Mero project (Libra block) which is located 180 kilometres off the coast of Rio de Janeiro, in the prolific pre-salt area of the Santos Basinin Brazil.

The Mero 3 Floating Production Storage and Offloading (FPSO) unit will have a liquid treatment capacity of 180,000 barrels per day and is expected to start-up by 2024.

Arnaud Breuillac, President Exploration and Production at Total said the decision to launch Mero 3 marks a new milestone in the large-scale development of the vast oil resources of the Mero field, which is estimated at 3 to 4 billion barrels.

“[The decision] is in line with Total’s growth strategy in Brazil’s deep-offshore, based on giant projects enabling production at competitive cost, resilient in the face of oil price volatility,” he said.

“The Mero project will contribute to the Group’s production from 2020 onwards, and we are targeting a production of 150,000 barrels per day in Brazil by 2025.”

The Mero field has been in pre-production since 2017 with the 50,000-barrel-per-day Pioneiro de Libra FPSO.

Total has been present in Brazil for over 40 years and has more than 3,000 employees in the country. The Group operates in all segments: exploration and production, gas, renewable energies, lubricants, chemicals, and distribution. Total Exploration & Production’s portfolio currently includes 24 blocks, with 10 operated. In 2019, the Group’s production in the country averaged 16,000 barrels of oil per day.

Moreover, in October 2019, a consortium led by Total was awarded Block C-M-541, located in the Campos Basin, in the 16th Bidding Round held by Brazil’s National Petroleum Agency (ANP).