The global liquefied natural gas (LNG) market is forecast to get tighter and could even see annual supply deficits as a result of likely delays in the development of LNG projects in Mozambique due to the country’s worsening security situation, Rystad Energy outlines in a new report.

Mozambique was once poised to catapult into the upper ranks of global LNG producers by the middle of this decade, but Total’s recent force majeure declaration signals indefinite delays on its onshore Mozambique LNG complex, says Rystad.

The market could see up to 9 Mtpa of supply removed between 2026 and 2030, disrupting global balances.

Rystad previously forecasted a largely balanced market in 2026, but now there could be more competition for available volumes that year, leading to an upside risk in prices and higher price volatility.

Similarly, the loose market conditions of 2027-2028 that Rystad had originally forecasted could become more balanced if Rovuma LNG’s 15.2 Mtpa of potential capacity is unavailable.

Across 2029 and 2030, Rystad notes there is potential for the market to tighten again and face supply deficits amid an expected surge in global LNG demand, as Rovuma LNG may only reach plateau production after 2030. 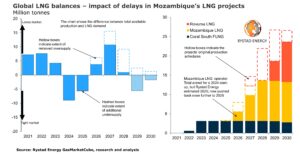 “We now expect Total’s Mozambique LNG to start production only in 2026, with construction unlikely to resume without demonstrably stronger security arrangements at the Afungi site. Rovuma LNG may be delayed enough to mean it is brought online only around 2029,” Ramesh shared.

In Rystad’s updated forecast, which accounts for delays in the two projects in Mozambique, it now expects an oversupply of 4 Mtpa in 2026, down from the previous forecast of 6.4 Mtpa.

The impact of the delays is anticipated to grow in 2027, causing the expected oversupply to shrink to 11 Mtpa from the previously forecast 15.9 Mtpa. The largest downgrade is for 2028, with oversupply being limited to just 1 Mtpa, down from 9.3 Mtpa in Rystad’s previous forecast.

The delays for both Mozambique LNG and Rovuma LNG is sobering news for LNG buyers and sellers alike. Mozambique has a large, low-cost resource base – making its LNG projects highly competitive – and the country is conveniently located to serve upcoming demand in Asia.

Rystad estimates DES Asia break-evens of Mozambique’s LNG projects to range between $5 and $7 per MMbtu.

Mozambique LNG is underpinned by long-term contracts covering more than 85 per cent of its production capacity. Its foundation customers include both end-users and portfolio players. With production now forecasted to commence in 2026, buyers expecting volumes in the tight market years of 2024 and 2025 may need to look for other sources of supply.

This is likely to create upward pressure on prices as end-users search for alternative suppliers and portfolio players seek to cover short positions. Those without long-term contract coverage risk having to buy from an increasingly volatile spot market.

From the sellers’ perspective, the force majeure notice (potentially even the existing contract terms) may provide respite from delivery obligations until production has begun.

Total may also provide volumes from its global portfolio, but such transactions would add a layer of commercial complexity as the Mozambique LNG SPAs are joint SPAs with other Area 1 concessionaries.

Although Rovuma LNG’s project timeline is behind Mozambique LNG, its forecasted delay from 2027 to 2029 is likely to have a larger impact on the market as its production is taken off an increasingly balanced market. Rystad advises that this could contribute to greater volatility and higher prices towards the end of this decade.

With a strong pipeline of liquefaction projects under construction, Rystad previously expected that a new wave of supplies coming into the market around 2025 would create a downward cycle in prices, with the Asian spot price dropping to a level closer to the short-run marginal cost of US LNG of $5.7 per MMBtu in 2027.

However, the potential delay of the Mozambican projects means that now there is an increasing risk of a prolonged period of tightness midway through this decade, and that lower prices could be seen one to two years later than previously expected. As a result, Asian spot prices could remain above $8 per MMBtu in 2025.

The downside risk in prices between 2026 and 2029 is also reduced by a better-balanced market – while Rystad still expects prices to decline, there is higher likelihood for them to remain above $6 per MMBtu in 2027.