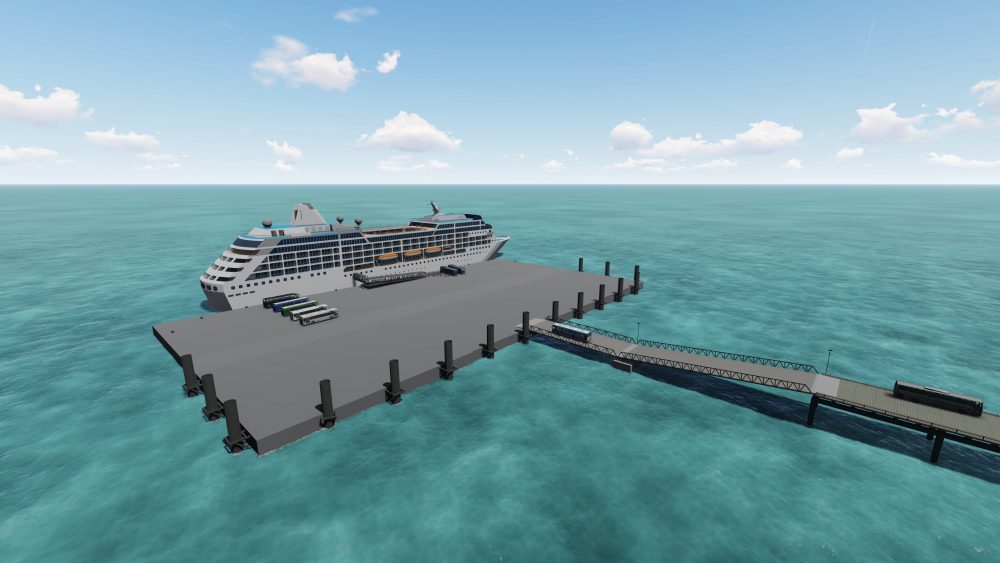 Artist’s impression of the Marine Supply Base, courtesy of the Kimberley Ports Authority.

The Western Australian Government has approved the proposal for the Kimberley Marine Support Base at the Port of Broome, positioning it as the future service hub for the growing oil and gas industry.

The $110 million facility will be constructed and funded by Kimberley Marine Support Base (KMSB) Pty Ltd, and comprise a floating wharf, along with associated on-shore terminal facilities.

The new floating wharf will be able to deal with the variable tides in the area, while the opportunity for increased crane lifting capacity will add to the current capacity at the Port of Broome.

KMSB aims to have the new facility operational in early 2022 to capitalise on opportunities associated with new oil and gas projects such as the Browse development, as well as opening up new opportunities in the Kimberley agricultural and resources sectors.

Construction and ongoing operation of the facility is expected to help stimulate both economic and employment opportunities in the Kimberley region and add further capacity at the Port of Broome.

KMSB and the Kimberley Ports Authority (KPA) will enter a long-term commercial lease for the facility, and KPA will provide stevedoring services during construction and the first five years of operation.

KMSB is still required to complete environmental approvals, project and financial agreements and a final design and commissioning plan.

According to KMSB, the project is expected to generate approximately 250 jobs during construction while ongoing operations could provide more than 500 permanent jobs in Broome and more than 1,500 jobs State-wide. This is expected to contribute $135 million a year to the local economy.

Mining and Pastoral MLC, Kyle McGinn, sees the investment in the facility as a critical piece of infrastructure to position Broome for an even better future.

“I strongly believe that the State and industry should continue to capitalise on locally available skills and provide local jobs to further benefit the community,” he said.

“To hear that the Kimberley Ports Authority will provide stevedoring services not only during construction but for the first five years is a just reward for what has always been a highly successful and constructive port.”

“This is something the community should celebrate as it will be a real boost to the local economy,” Mr McGinn commented.